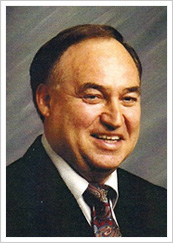 Coach graduated from Delone Catholic High School in 1959 where he was an outstanding athlete and earned nine letters in football, basketball and baseball. He went on to play football for the University of Maryland in 1960, and the University of Villanova from 1961 to 1964. He also played in the 1961 Sun Bowl in El Paso, Texas and the 1962 Liberty Bowl in Philadelphia. He received his B.S. in Accounting in 1964. Upon graduation, Coach began teaching and coaching at Delone Catholic High School. He was the head football coach from 1966 to 1978, during which time he coached three undefeated teams in the former South Central Pennsylvania Football League. In 1974, he was named Pennsylvania Coach of the Year and was named a coach for the Pennsylvania football team in the annual Big 33 match-up. He was inducted into the South Central Pennsylvania Hall of Fame in 1999 and the Adams County Hall of Fame in 2000. He retired from coaching in 1978 and from teaching in 1992.

Coach was the owner/operator of the Goalpost Tavern in Hampton from 1981 until June 2006 and the Goalpost II in Hanover from 1985 until 1995.

Coach very much enjoyed spending time with his family; he always wanted his family together. He loved the beach, watching sports and a good meal. He enjoyed watching the annual pool tournaments that he organized and ran for many years. His quick wit and one-liners gave everyone who knew him a smile and a good laugh. He was always willing to give advice and/or help to anyone who asked for it. He had a remarkable memory, which amazed us time and time again.

In December 1998, Coach was diagnosed with leukemia. He never gave up hope or his FIGHT to WIN his BATTLE against this insidious illness. He was always asking his doctors for their next “PLAY”. He physically and emotionally endured so much and never once complained. He was, and still is, an inspiration to all of us.

On June 26, 2006, Coach’s very long, courageous and private battle was over. He died peacefully, at home, with his family by his side…